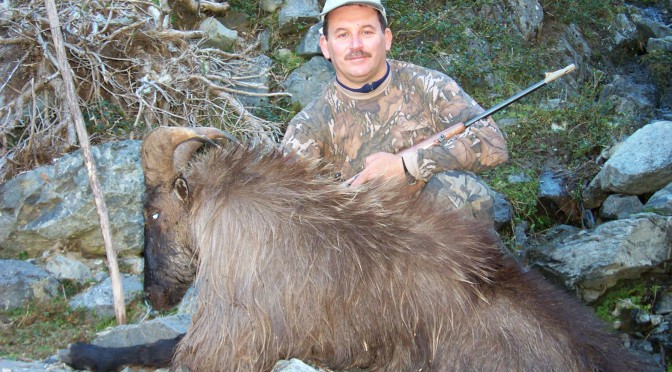 On a hunting trip to New Zealand. I started my expedition at 3:30 a.m. in the cab of a 4×4 pickup truck, or ute, as my guide called it. My guide was a native New Zealander, a highly experienced hunter and his assistant a British man, an experienced mountain climber. We had all of our gear unloaded and ready before dawn broke. We had a long day ahead of us.

Most people accessed the area by helicopter because of how rugged the area is. However, the small animals located near the base of the mountain, usually tracked by helicopters, were not my intended game I had my sights set higher on the larger animals which resided near the summit, the Tahr, large Asian Ungulates closely related to wild goats.

The Tahr are not native to New Zealand. This particular species, the Himalayan Tahr, was introduced to the area in 1904 for sport. Since their introduction, they flourished in their new habitat. New Zealand has become wickedly over run by the game. So much so, that the New Zealand Government used to pay a bounty to hunters to prevent the Tahr and other big game from destroying the ecosystem.

Since the Thar resided near the summit, the only way to track them was by foot. We began our ascent, scrambling up the steep slope. Loose rocks skittered out beneath my feet as I climbed. The sheer drop-offs of the cliff sides grew more regular as I gained altitude. Winds of over 50 miles-per-hour are very common. The terrain and elements made it very difficult to climb, and I found myself grateful for my guide’s experience.

After ascending 8,000 feet, we reached our destination, above the tree line near the summit. I set up my 7mm WSM Browning A-bolt Rifle and loaded it with my Nosler-tipped hand-loads. I lay out prone and peered through my 4-12x Leupold Scope.

I scanned the landscape, until we found the herd. I spotted a bull, a large animal with thick, curved horns. His long hair was long and it blew in the wind. He stood still upon a jutting rock ledge, above the rest of the herd. He seemed to surveyed them proudly.

I studied him, eagerly, through the scope, longing to take the shot, but knowing better. Winds that heavy would be wreak havoc on a 358 yard shot like this. I didn’t want to risk missing that Bull with a premature attempt so, instead, I waited. For an hour and a half, I lay on a rock ledge. Everything ached, and my eyes got blurry. I kept my eye on the bull. Then his hair stopped waving and I knew the wind had died down enough to take the shot. I took a breath and squeezed the trigger.

I felled the Bull on the first shot.

I had to get over the summit of the mountain and descend a ways down the ridge line to reach the Bull. I later found that he was the fourth largest Tahr ever taken according to SCI records.

Since it was still early in the day, I continued my hunt. The second Tahr I was able to shoot was lost in a chasm after it lost its footing and fell of the mountain.

My third Tahr was recovered . We processed the meat , so we were able to keep it in addition to taking a trophy.
By then, it was late afternoon and the wind had picked up again. I started down the mountain, and it was even tougher than the trip up. The wind was cold, and whipped at me relentlessly. Somehow, I became separated from my guide. I tried my radio again and again, but the ripping wind was deafening. Lost on the mountain with no cold weather gear, I felt the first twinges of uncertainty. If I didn’t find my way off the mountain before nightfall I would risk freezing when the temperatures plummeted.

Finally, a lull in the wind allowed me to contact my guide.
“Sorry, Gordon,” He told me, “But I can’t get to you.”

He told me we’d have to meet further down the mountain, so I continued my descent alone. Finally, my guide was able to reach me. I was filled with relief to have his company as well as his help.

We carefully navigated the rugged path, but not carefully enough. A patch of soft earth gave out beneath me. I slid down an avalanche chute toward the cliff side. Before me, I saw the steeply sloped earth ending in open air.
I scrambled for something to grab as my guide skidded down after me, in an attempt to reach me before I reached the edge.

My guide caught my hand and pulled me to safety.

I sat on solid, unmoving ground, catching my breath. That was close. The remainder of our descent was comparatively uneventful and we reached the ute a little after dark.

That night, it snowed and the mountains were covered. I couldn’t suppress a chill when I thought about how close I came to ending up trapped out there beneath several feet of snow or smashed at the bottom of a chasm like Tahr number two.

Climbing and descending that mountain was one of the hardest thing I’ve ever done. To offer some context, when I say this hunt pushed me to the edge of what I could endure, I do not say this lightly. As a former U.S. soldier, I have endured a great many difficult things. This hunt topped them all.