It was a perfect setup for prairie dogs; we had a big shade tree to our left, three of us in line on portable benches, with a big colony stretching away before us. Stephen Shen was on the left, Gordon Marsh in the middle, me on the right. Interestingly, all three of us were shooting the 204 Ruger cartridge: Stephen a Savage 116, while both Gordon and I were shooting Ruger No. Ones, his in blue/walnut and mine stainless/laminate.

It wasn’t universal; Bill Green was off the right, popping away and having a ball with a semi-auto 17 HMR . This was Gordon and Bill’s annual prairie dog shoot out of Cheyenne, hunting with Craig Oceanak and Nick of Timberline Outfitters. It was my second shoot with them; for Stephen, CEO of Vector Optics, his first ever. We had other rifles, 223’s and 22-250’s. However, except for Bill, who clung to his 17 HMR and walked in some amazing shots, the 204’s did the majority of the work.  There are many excellent varmint cartridges, so it struck me as unusual that three among our foursome were shooting 204’s…but I think we made good choices.

When I say “varmint cartridge” I’m thinking rodents that eat grass and dig burrows, and thus cause problems for farmers and ranchers. Woodchucks in the East; prairie dogs, rock-chucks, ground squirrels and gophers in the West. Developing cartridges and rifles for this class of pest is primarily an American phenomenon, and we’ve been doing it for a long time.

The requirements are simple: Accuracy, range, and minimal recoil. Accuracy because we’re dealing with small targets. A ‘chuck is comparatively large, but an upright prairie dog is only a couple inches across. A “one-MOA” rifle is thus a 200-yard prairie dog gun. One-half MOA is really the starting point. Ranging capability does depend on how you go about it. The rim-fires are great fun for short-range work…and stalking the edges and shooting from field positions with center-fires is excellent training. But if you set up from deliberate shooting positions and try to reach out several hundred yards, fast, flat-shooting cartridges are essential.

In a big ‘dog town you might shoot steadily all day, with numerous breaks to cool and clean barrels. When I was a kid, I did a lot of prairie-dogging with a 264 Winchester Magnum—but it’s silly to take that much pounding. The 6mm’s and 25’s remain excellent crossover cartridges: Varmints with lighter bullets, big game with heavier bullets. Power is not an issue; at close range the 22 LR is plenty good for the job.

However, the biggest problem with cartridges above the 22 center-fires is even that modest amount of recoil makes it impossible to call shots through the scope. This is especially important in the windy West. As range and wind effect increase, not every shot will hit. The ideal situation is to observe the strike through the scope and correct. You can’t do this while you’re lost in recoil! I’ve often said that prairie dogs are great teachers, both for precise shot placement and for calling wind. The buddy system works, taking turns spotting and shooting—but you’ll learn more if you can call shots through the scope and make your own corrections.

We have multiple choices, and the arguments for one cartridge versus another are actually pretty thin. The little 22 Hornet, introduced in 1930, was probably the first center-fire intended for varminting. It retains a following and I love it—but with modest velocity it’s limited in range. Introduced in 1935, the 220 Swift was the first commercial cartridge to break 4000 fps—and it’s still among few that do. Accurate as well as fast, the Swift still has fans, but for many years the 22-250 Rem has been the most popular fast 22 center fire. 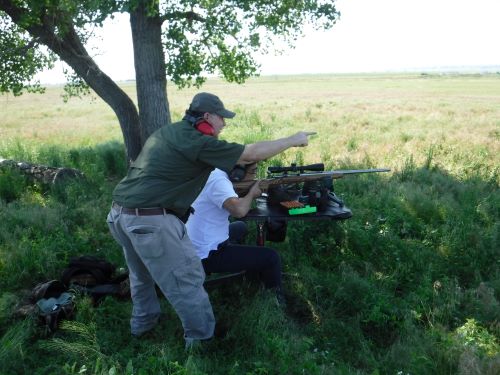 If there’s a problem with the 22-250 Rem, it’s simply that, unless gun weight is fairly extreme, there’s just too much recoil to call shots through the scope. So, over the years, many of us have consciously sacrificed velocity and range and used milder 22 center-fires. Developed by Remington’s Mike Walker as a bench-rest cartridge back in 1950, the mild and super-accurate 222 Remington filled this niche perfectly. Its lack of popularity today is coincidental. In the late 1950s the U.S. Army was looking for a smaller-caliber military cartridge. The 222 Remington didn’t have quite the velocity they wanted, so the 222 Remington Magnum was created with a longer case. It wasn’t popular as a civilian cartridge and wasn’t adopted by the military, losing out to the 223 Remington.

With a 55-grain bullet at about 3300 fps it’s effective on small varmints to at least 300 yards, and even in a fairly light-barreled rifle it’s mild enough to call shots through the scope. New contenders such as the 22 Nosler and Federal’s 224 Valkyrie will also run through the AR15 platform and offer more velocity. We could also argue that they are “better” cartridges…but it remains to be seen if they can approach the 223’s popularity.

Australian fox hunters created 17-caliber center-fires because the light bullet wouldn’t exit, thus minimizing pelt damage. In 1971 Remington necked down the 222 Remington Magnum to create the .17 Remington, a 4000 fps-cartridge with bullets up to 25 grains. The 17’s are useful, and today we have choices, from rim-fires up through the 17 Hornet, 17 Remington Fireball, and the granddaddy 17 Remington. Accuracy can be astounding and there’s plenty of power for prairie dogs and such, although I question the milder 17’s on coyotes. The big problem: The 17-caliber’s light bullets just don’t hold up in wind!

The 20-calibers, bullet diameter .204-inch, are a recent development, spawned by good old American wildcatters in the 1990s. There are a number of wildcat and proprietary .20-caliber cartridges, but the 204 Ruger is the only factory .20-caliber. Introduced in 2004 as a joint project between Hornady and Ruger, the 204 Ruger is based on the .222 Remington Magnum case.

The theory is to split the difference between the 17’s and .22 center-fires…and the actual result, to me, offers the best of all worlds. Again, we’re talking the specialized world of varmint cartridges. The 20-caliber doesn’t offer the heavy-bullet flexibility of the 22 center-fires for larger game. They are certainly effective on fur-bearers up to coyotes, but don’t minimize pelt damage like the 17’s. Also, the faster 17’s are prone to rapid fouling; the 20’s are not.

The 204 Ruger took off fast. All major manufacturers load it, with bullet weights from 24 to 45 grains. At about 34 grains and lighter the 204 Ruger reaches or exceeds 4000 fps. I’m not usually quick to pick up on a new cartridge—especially in an unfamiliar bullet diameter! My usual mantra is (grumble, grumble): “We’ve got enough calibers and cartridges!” A Ruger No. One in 204 Ruger, stainless and laminate in heavy-barrel configuration, came in as a test rifle. I was impressed enough to buy it and, nearly 15 years later, it remains my go-to prairie dog rifle.

Here’s what I like about the 204 Ruger: Accuracy is consistently good with all loads. My preference is the 40-grain load, not the fastest at 3900 fps, but with that heavier bullet it holds up in wind better than the faster, lighter bullets. More importantly, it seems to perform about as well as the 22-250 Rem at similar velocities with varmint bullets from 50 to 55 grains. Most important: With the lighter bullet and heavier barrel (smaller bore equals more steel for equal barrel diameter) it has less recoil than a 22-250 Rem, so I can easily call shots through the scope.

Requirements for an ideal varmint cartridge are simple: Accuracy, velocity, shoot-ability. If I had to cut down to just one, it’s the 204 Ruger I’d hang onto!

9 thoughts on “204 RUGER: THE BEST VARMINT CARTRIDGE? By Craig Boddington”