The Colt 45 also known as 45 Long Colt, 45 LC is one of the original center fire cartridge still in production and going strong.

The 45 Colt came in to being when the US Army put out for bid a new revolver that would use a 45 caliber bullet at 250 grains over 40 grains of black powder. It is said the requirement was based on the desire to have a revolver that could drop an Indian War pony at 100 yards.

Colt beat out Smith and Wesson with their now famous Colt 1873 Single Action Army revolver and the cartridge got it’s first name the Colt 45.  However good the revolver  was difficult to reload on horse back.  The Army then ordered some break open design pistols from Smith & Wesson known as the Schofield revolver. These guns proved to be very popular and successful however they were not strong enough to fire a full power Colt 45 cartridge. They were chambered in basically a shortened version of the Colt 45.

Now that the Army had two 45 caliber revolver cartridges in inventory and they both could be fired in the 1873 SAA revolver, the name 45 Long Colt started to be used to avoid confusing with the Schofield cartridge. It is a fun cartridge to shoot and reload but caution must be used when reloading because with many smokeless powder there is a danger of double or triple charging a case. That’s why we recommend using Tin Star powder.

Try using Tin Star powder for your Colt .45. This powder will fill the case completely like black powder but it is a smokeless powder that has a light bulky density for use in old black powder cartridges like the Colt 45 and give you the pressure and velocity as the originals. Most people shoot the Colt 45 in Cowboy type guns like the 1873 SAA Colt revolvers or reproductions. I would strongly advise to stay with loading cast lead bullets. The original lead alloy for these bullets was 20 parts lead and one part Tin. This alloy will give you the best performance and the least leading problem.

Quality Cowboy bullets are made by Missouri Bullets. A charge of Tin Star powder that nearly reaches the bottom of a 250 grain Missouri Bullet from a 7 1/2″ barrel will give you a velocity of 930 FPS. LG Outdoors has a good supply of this hard to find reloading powder..

When it comes to competition grade ammo, here at LG Outdoors, we know that not all ammo is created equal. So don’t miss our great sales on Remington .22 Long Rifle Hyper Velocity 36 Grain Truncated Cone Solid Ammunition for your Match practice and developmental shooting needs.

This ammo provides you with consistent quality you can rely on. So, whether practice plinking or shooting for that bulls-eye in a competition, when you’ve loaded your .22 with this competition grade rimfire ammo you can be confident that you’re ready for whatever comes next. With quality like this, you can be assured that your every shot can reach its maximum. The Truncated Cone design of this Remington .22 LR round offers a great balance between penetration and power. The aerodynamic build of the Remington .22 LR Hyper Velocity 36 Grain Truncated Cone Solid Ammunition offers heightened accuracy and reliability, and its light-weight design allows these rounds to reach hyper velocity. END_OF_DOCUMENT_TOKEN_TO_BE_REPLACED

More years ago than I care to count up, I was a soldier in the Army and was stationed in Germany. I love to hunt, and I really love the thrill of hunting big game, so I figured as long as I was there, I would learn what I could about sport hunting in that country. I was about to discover hunting in an entirely new way! END_OF_DOCUMENT_TOKEN_TO_BE_REPLACED 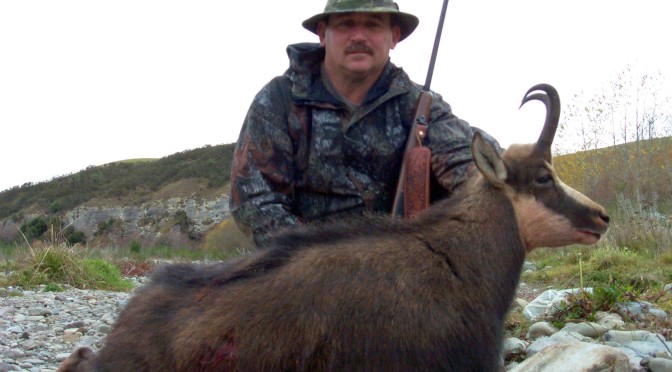 Relaxing in a duck blind with a six-pack of cold ones, some BBQ, and a colorful collection of hunters in a foreign country… They say there are better things in life, but not many. This was another one of my New Zealand adventures, albeit, a much tamer one. In the company of other New Zealand hunters, I waited in a duck blind on the southern coast of New Zealand. Our game was waterfowl and we looked out on a saltwater marsh separated from the South Pacific by a rocky berm.

We shot 80 or 90 ducks from our blind that day. When we were done, shells littered the wooden floor and my ears rang with the echoes of shots from my Beretta and the other shotguns. Our take was a combination of mallards and paradise ducks. Paradise ducks are a particularly interesting breed because they mate for life, and, unlike most other breeds, it is the female who has the most colorful plumage. END_OF_DOCUMENT_TOKEN_TO_BE_REPLACED